​We are SHIELD TRAINING CENTER, the Shasta-Tehama-Trinity Public Safety Training Consortium; an organization in the north state where public safety entities have formally joined forces to execute a vision to provide frequent and affordable training courses for all public safety organizations in our region. Additionally, this joint effort will eventually extend to a new regional training facility which will enable us to offer state of the art training to meet the demands placed on today’s public safety organizations. Throughout the 1980s and 1990s, multiple attempts were made by the various fire department organizations in Shasta County to secure grant funding for a regional fire training center through local philanthropists. In the north state much of the technical training needed was unavailable and departments were forced to send employees’ out of the area at extremely high costs. The costs were so high that it limited the number of employees that could be sent for the trainings, if they could afford to send any at all. So, in 1998, the Shasta College Regional Fire Training Center Advisory Committee was formed to bring together regional fire organizations from Shasta, Trinity and Tehama counties to even further organize the effort for a regional training facility. However, as their efforts increased so did the training requirements, and fewer and fewer departments were able to maintain what was needed on their own. Their strenuous attempts failed time and time again and a deteriorating economy forced the hopes for this much needed facility to be placed on hold. Grant funding to support such a project required better times and a fine tuned proposal that had yet to be made. So, it is with great pleasure that we present the newly formed SHIELD TRAINING CENTER, the Shasta-Trinity-Tehama Public Safety Training Consortium. Through this collaborative effort, relationships will be forged and strengthened, culminating in a higher level of service to the public. The goal is to reduce, if not eliminate, the need to send employees away for training as the training will now be offered locally. Together we protect and serve our community.

To be a model multi-jurisdictional public safety training program for the state and nation, and to provide a higher level of service to our communities.​ 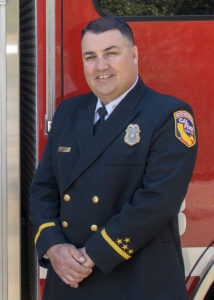 Bret Gouvea began his career with CAL FIRE in 1990 as a Firefighter in the Shasta-Trinity Unit.  In between fire seasons, Bret earned an Associate of Science Degree in Fire Science from Shasta Community College and a Bachelor of Arts Degree in Public Administration from California State University, Chico.  While attending Chico State, Bret focused on course projects within the department, such as an internship in fiscal management, an analysis of the unit’s operating and expense budget, and studying the department’s strategic plan under development, which would later pave the way for his assignment to Cal Fire’s statewide Budget Re-design Committee.

After serving as a Firefighter, Fire Apparatus Engineer, Fire Captain, Battalion Chief, and Assistant Chief across Shasta-Trinity and Tehama-Glenn Units, Bret accepted his current position as the Deputy Chief of Operations for Shasta-Trinity in 2013. Bret also holds the position of Incident Commander on CAL FIRE Incident Management Team #1. During his years of service, Bret has been actively involved in many training cadres and is now a senior instructor for Fire Control 3, instructor of record for State Fire Training CFSTES Command courses, including the Incident Commander L-950 course cadre, and has been a member of the Firing Methods Series Curriculum Development Group for the past nine years.

Bret resides in Redding with his wife Terri and their sons Colby and Matthew. He enjoys hunting, fishing, and camping. 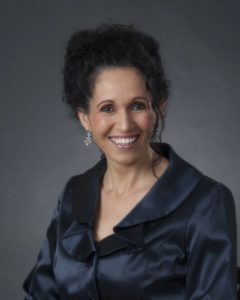 In addition to her role as Executive Director of the Shasta College Foundation, Eva Jimenez currently serves as the Vice President of Economic and Workforce Development where she manages grant managers and is responsible for the outcomes of numerous grants totaling close to $15 million. Many of these grants involve partnerships with K-12 and community industry partners. Ms. Jimenez began her journey at Shasta College as a business instructor seventeen years ago. She delivered courses in business management, marketing, entrepreneurship, leadership and other business-related topics. Ms. Jimenez played an integral role in delivering customer service modules to many community partners during her instructional years. For the past nine years, Ms. Jimenez has served as an administrator which allows her to utilize her twenty years of private-industry management experience.

Currently, Ms. Jimenez serves as a member of the Redding Rotary, United Way Board,  and Dignity Health North State Advisory Board. Additionally, Ms. Jimenez is President-elect of the California Community College Association for Occupational Education, an 800 member organization affiliated with our system.  Her most accomplished work at Shasta College has been as founder of the STEP-UP program.  STEP-UP is a restorative justice program which started in 2012.  Since then, the program has served hundreds of students and it has received numerous awards and recognitions across the state.

Prior to Shasta College, Ms. Jimenez worked for a financial institution in Sacramento, California where she managed over 180 employees. Ms. Jimenez has earned her master’s degree in business administration, which coupled with over twenty years of experience in professional, organized, and customer-oriented environments is a testament to her drive and passion for the promotion of economic growth through high quality education and services that focus on workforce improvement.

On the weekends Eva enjoys hiking and spending time with friends and family. Eva is a wife and is a proud mother of two beautiful ladies. Her most accomplished personal success story has been beating breast cancer in 2018! 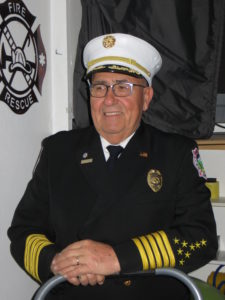 Don Kerns has been the Fire Chief of the Mountain Gate Fire Department since 2000. During the past three years, he has also been the President of the Fire Chiefs Association of Shasta County.

Don became an Advanced Life Support Medical Provider in 1980 and retired in 2012 after serving his last 17 years as a Life Support Paramedic for Mercy Medical Center’s Ambulance and Air Ambulance Service.

Upon earning a Bachelor of Science in Marine Engineering from the California Maritime Academy at the University of California, Vallejo in 1965, Don spent several years traveling the world plying his trade as a Marine Engineer before becoming a plant superintendent in a manufacturing facility and a small business owner.

Don lives with his wife of sixteen years, Becky, and has two grown sons, Kevin and Jody, who both live and work in the North Valley area.  Don and Becky have also helped to raise five foster children. 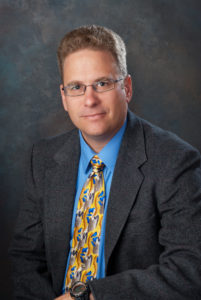 Dr. Joe Wyse is the Superintendent/President of the Shasta-Tehama-Trinity Joint Community College District. He started in this position on August 1, 2011 after serving for the previous four years as Vice President of Administrative Services for Shasta College. He completed his Educational Doctorate in Organizational Leadership at Pepperdine University in May 2014, and holds a Master’s degree in New Testament Studies from Trinity International University, and a Bachelor’s degree in Physics from Kenyon College. Dr. Wyse’s prior experience includes serving as Executive Director at the Trinity Law School and Graduate School, part of Trinity International University, California Regional Center, from 2004 – 2007. Dr. Wyse served in several other administrative positions at Trinity International University, including Associate Dean of Administration from 1998 – 2004 and Director of Enrollment Services from 1996 – 1998.

Brian Barner has been with the Redding Police Department for 23 years, and currently serves as a Captain and the Division Commander of the Field Operation Division. He earned his Bachelors in Criminal Justice Administration and his Masters in Public Administrations. His past assignments include SWAT, K9, Investigations, Traffic/ Motors and Administration.

Cullen Kreider is the Fire Chief of the Redding Fire Department. He and his wife Michelle have two children, a daughter at Shasta High School and his son attends Sequoia Middle School. He grew up in Redding, attended Manzanita Elementary, Sequoia Middle School and Shasta High School. He completed an AA degree in Fire Technology at Shasta Community College and a Bachelor of Science in Fire Administration from Cogswell Polytechnical in Sunnyvale, CA, Cullen completed his Fire Officer Certification and Chief Officer Certification from the California State Fire Marshal Office.

Cullen has also worked as an instructor at the Shasta College Fire Academy and in the construction industry as a plumber, cement finisher, framer and roofer in Redding and Sacramento from 1988 to 2000. 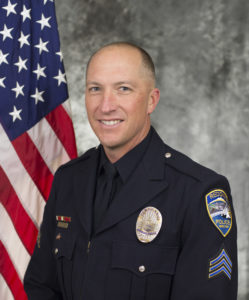 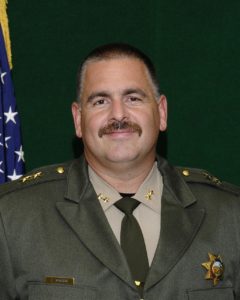 Undersheriff Eric Magrini began his Law Enforcement career in January of 1998 as a Police Officer for the City of Red Bluff where he ultimately promoted to the rank of Sergeant, assigned to the Patrol Division. In December of 2006, Magrini was hired by the Shasta County Sheriff’s Office to work in the community he was raised in and resides in. He worked on patrol in both the City of Shasta Lake and the county’s Patrol Operations Division. While serving as a patrol deputy, Eric held several collateral duties to include; SWAT team member, Dive team member and Field Training Officer. He also assisted by working overtime with the department’s Marijuana Enforcement Team and Domestic Highway Enforcement Team.

During that time, in 2007 Magrini was named by the Exchange Club as Peace Officer of the year. In 2009, Magrini was promoted to Detective working in the Major Crimes Unit. Then in 2011, Eric was names as the Sheriff’s Office’s Deputy of the Year.

Magrini then promoted to Administrative Sergeant where he served for 2 years; at which time he also became the SWAT Team Leader. In November of 2013, Magrini promoted to Lieutenant and was assigned to County Wide Services, overseeing the Coroner’s Office, Animal Regulations and the Civil Unit. Eric was promoted to Undersheriff and officially took the title and duties in January of 2015. 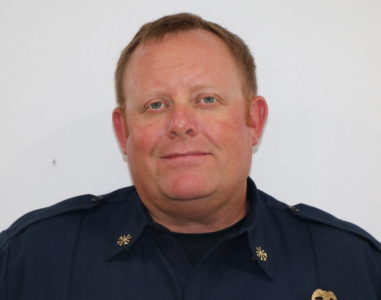 Dave began his career in 1989 as a seasonal Firefighter with the California Department of Forestry and Fire Protection. In 1994 Dave accepted a position with the then Montana Department of State Lands as an Engine Boss on the Stillwater State Forest and eventually returning to California in 1998. In 1998 Dave accepted a full-time position with CALFIRE working in multiple programs before his current position as Deputy Chief in the Tehama/Glenn Unit.

Todd Garber began his career with CAL FIRE in 1998 as a Firefighter in the Butte Unit.  Todd spent the first 8 years of his career on the municipal firefighting side of CAL FIRE where he was a member of the Butte Interagency Hazardous Materials Team.  While he was in the Butte Unit, he was assigned to Fire Stations in both Chico and Oroville.  Throughout his diverse career, Todd has worked in both municipal and wildland fire stations, he has worked in the Emergency Command Center, worked with inmates in CAL FIRE’s camp program, and was recently assigned to CAL FIRE’s Northern Region Operations Center where he functioned as a CAL FIRE Duty Officer.

After serving as a Firefighter, Fire Apparatus Engineer, Fire Captain, and Battalion Chief in several units across Northern California, Todd accepted his current position as the Division Chief of CAL FIRE’s Northern Region Training program. During his years of service, Todd has been actively involved in many training cadres and working groups.

Todd holds an Associates Degree from Orange Coast College.  He currently resides in Redding with his son Joseph. He enjoys geocaching, fishing, and camping.